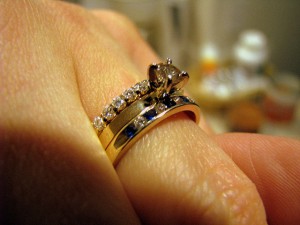 This is a very moving story about a man that loved his wife through 20 years of sickness with Alzheimer’s.  Truly,  love is more than a feeling. This episode is recounted by Ravi Zacharias in his book “Jesus Among Other Gods.”

“Dr. J. Robertson McQuilkin was formerly the president of Columbia Bible College and Seminary. He is one of the most remarkable people in our world. He is a conference speaker and author of note. But none of those credentials exceed his exemplary and heart-gripping love for his ailing wife, Muriel. She has walked down the grim and lonely world of Alzheimer’s disease for the last twenty years. Dr. McQuilkin gave up his presidency and numerous other responsibilities to care for her and to love her. He has penned his emotional journey in one of the most magnificent little books ever written. At one point in the book he recounts this incident:

“Once our flight was delayed in Atlanta, and we had to wait a couple of hours. Now that’s a challenge. Every few minutes, the same questions, the same answers about what we’re doing here, when are we going home? And every few minutes we’d take a fast paced walk down the terminal in earnest search of—what? Muriel had always been a speed walker. I had to jog to keep up with her!

“An attractive woman sat across from us, working diligently on her computer. Once, when we returned from an excursion, she said something, without looking up from her papers. Since no one spoke to me or at least mumbled in protest of our constant activity, “Pardon?” I asked.

The problem of evil and suffering is a real problem. We struggle with it from a rational/philosophical standpoint and also from an emotional perspective. Christians often struggle more with the emotional dimension than just wrestling with the logic behind the question because we believe that God has a morally sufficient reason for the evil and suffering that is in the world.

But atheists can bring this up in debate as a trump card. And it often “works” because of it’s strong emotional appeal.  Ravi Zacharias does a good job treating this in this in his book “Jesus Among Other Gods.”  He says that often this issue is raised with a list of the worst atrocities in history. This is fine,  and is actually part of my point here. The way those atrocities are discussed suggests that the person really believes they are wrong.  The world should be different than it is. The argument is a kind of protest.  And sometimes it is a protest against a god they believe should have prevented this. This outrage is used to show that an all loving and all powerful God couldn’t exist.  The conclusion: There is no god.

What they don’t realize is that the problem of evil is not just a problem for Christians. It is a problem for every philosophy and worldview.

What they don’t realize is that the problem of evil is not just a problem for Christians. It is a problem for every philosophy and worldview.  And unwittingly by removing idea of God, the atheist has removed any absolute standard of right and wrong. Now the very list of atrocities no longer wear the label “wrong” or “evil.”  The atheist may dislike them, but it is no more than personal or societal preference. These things are not examples of either justice or injustice because those things do not exist except in our minds.  The world just IS.  That is just the way things are.  And yet the very protest is making a plea that the world should be different than it is.  At the very lease, the atheist believes it is wrong for christians to believe what they do. It could be phrased in some other way,  but there is an “ought” in the protest that could only be true if there were some greater moral imperative.  In the end, the protest defeats itself.

Zacharias quotes GK Chesterton, who has made the point with a flourish:

“All denunciation implies a moral doctrine of some kind and the modern skeptic doubts not only the institution he denounces, but the doctrine by which he denounces it. Thus he writes one book complaining that imperial oppression insults the purity of women, and then writes another book, a novel in which he insults it himself. As a politician he will cry out that war is a waste of life, and then as a philosopher that all of life is waste of time. A Russian pessimist will denounce a policeman for killing a peasant, and then prove by the highest philosophical principles that the peasant ought to have killed himself. A man denounces marriage as a lie and then denounces aristocratic profligates for treating it as a lie.

“The man of this school goes first to a political meeting where he complains that savages are treated as if they were beasts. Then he takes his hat and umbrella and goes on to a scientific meeting where he proves that they practically are beasts. In short, the modern revolutionist, being an infinite skeptic, is forever engaged in undermining his own mines. in his book on politics he attacks men for trampling on morality; in his book on ethics he attacks morality for trampling on men. Therefore the modern man in revolt becomes practically useless for all purposes of revolt. By rebelling against everything he has lost his right to rebel against anything.”

The atheist wants to use the problem of evil to disprove the existence of god. But in the process he ends up disproving the existence of evil.  And this is not just a rational problem, it is an existential problem without compare.

This passage is from Ravi Zacharias Book, “Jesus among Other Gods:”

“He who comes to Me will never go hungry, and he who believes in Me will never be thirsty.” Notice the power implicit in the claim.

“At the heart of every major religion is a leading exponent. As the exposition is studied, something very significant emerges. There comes a bifurcation, or a distinction, between the person and the teaching. Mohammed, to the Koran. Buddha, to the Noble Path. Krishna, to his philosophizing. Zoroaster, to his ethics.

“Whatever we may make of their claims, one reality is inescapable. They are teachers who point to their teaching or show some particular way. In all of these, there emerges an instruction, a way of living. It is not Zoroaster to whom you turn. It is Zoroaster to whom you listen. It is not Buddha who delivers you; it is his Noble Truths that instruct you. It is not Mohammed who transforms you; it is the beauty of the Koran that woos you.

“In Him is not just an offer of life’s bread. He is the bread. That is why being a Christian is not just a way of feeding and living. Following Christ begins with a way of relating and being.”