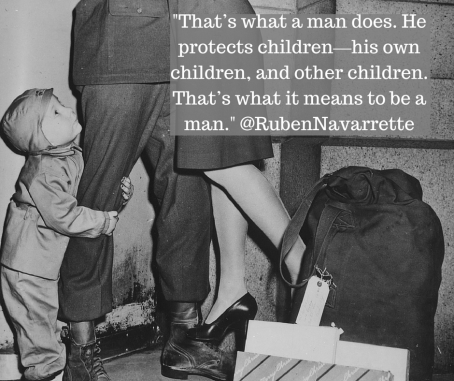 “That’s bullshit! These are babies that are being killed. Millions of them. And you need to use your voice to protect them. That’s what a man does. He protects children—his own children, and other children. That’s what it means to be a man.”

This is what Ruben Navarette’s wife told him about his neutrality on the subject of abortion. Navarette is a syndicated journalist who has never written on the topic of abortion, until now. And what prompted the change of heart?  The videos. And an angry woman that is close to him.

The whole article is worth reading. Here are some highlights:

“After all this, I still consider myself pro-choice, as I have for the last 30 years. I staked out this position during my freshmen year in college. Even then, I understood the abortion debate was a tug-of-war between competing rights—those of the mother versus those of an unborn baby. I sided with the mother. And I tried not to think about the baby….

“I arrived there for a simple reason: Because I’m a man. Many will say that this is not a very good reason, but it is my reason. Lacking the ability to get pregnant, and thus spared what has been for women friends of mine the anguishing decision of whether to stay pregnant, I’ve remained on the sidelines and deferred to the other half of the population.

“Over time, I made refinements—going along with waiting periods and parental notification laws at the state level, and coming out against the barbaric practice known as partial birth abortion.

“As I’ve only realized lately, to be a man, and to declare yourself pro-choice, is to proclaim your neutrality. And, as I’ve only recently been willing to admit, even to myself, that’s another name for “wimping out.”

“At least that’s how my wife sees it. She’s pro-life, and so she’s been tearing into me every time a new video is released. She’s not buying my argument that, as a man, I have to defer to women and trust them to make their own choices about what to do with their bodies. To her, that’s ridiculous—and cowardly.

“You can’t stand on the sidelines, especially now that you’ve seen these videos,” she told me recently. “That’s bullshit! These are babies that are being killed. Millions of them. And you need to use your voice to protect them. That’s what a man does. He protects children—his own children, and other children. That’s what it means to be a man.”

via I Don’t Know If I’m Pro-Choice After Planned Parenthood Videos – The Daily Beast. 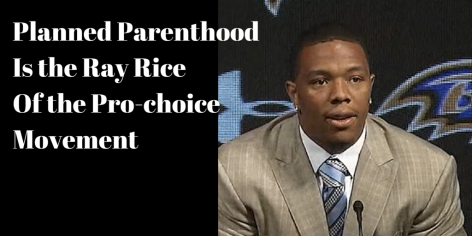 During the 2014 football season a scandal erupted surrounding Ray Rice, a running back for the Baltimore Ravens. A casino surveillance video showed Rice dragging his unconscious fiance out of the elevator. There was real concern and even outrage  expressed. But the whole story wasn’t known to the public at first. Then a second video was leaked from INSIDE the elevator showing Rice (an NFL running back) punch an average-sized woman into unconsciousness. Many remarked that it was not merely the vicious blow that he delivered but the way he treated her unconscious body that seemed to add insult to injury.

Seems pretty clear cut. This is a bad guy, right? Well, he is also a very successful running back, and a favorite in the community. He racks up lots of yardage and points for the Ravens and that translates into lots of money and fan support. Hard core fans couldn’t believe that the video told the whole story. There must have been more. She must have attacked him first. Maybe she had it coming…

The NFL has conduct policies and Ray Rice should have been in big trouble. He should have lost his job. But the initial punishment handed down by the NFL’s commissioner Roger Godell was light in comparison to the crime. And the public was rightly outraged. Gradually the NFL’s history emerged of showing leniency to it’s successful/money-generating players while handing out harsh punishments to the rank and file.  It seems that strong, successful football players get cocky and think they can break the law and get away with it.  And for a long time they have been right.  Everyone was glad to give them a get out of jail free card as long as they put up numbers for the team.

As the storyline solidified, the outrage surrounded the ethics of the NFL.  Did they have any ethics?  Is winning games and making money more important than doing the right thing? More important than violence?

Eventually the scandal bumped from the head story on ESPN to the front page everywhere.  But something was different this time. Players are accused of rape, sexual assault, and physical abuse all the time. The NFL has been facing these issues for years. What made Rice’s case such a big deal?

It was the video, that horrible video. You couldn’t watch the video without disgust.  Gradually public sentiment shifted and  Ray Rice was suspended and fired. The initial punishment was overturned and replaced with something more fitting. Why? One reason. The video.

Then the headlines drifted from talking about Ray Rice, to talking about the NFL.  Had they seen the video when the first, lighter punishment was handed out.  They claimed that they had not. They claimed they only saw the footage from outside the elevator.  Did they know how bad it was?  Did they even want to see the whole story?  Was the new punishment really a stance for what is “good and right” or just a response to public opinion. Was the NFL in damage control mode, only moved when the potential loss of revenue from the scandal outweighed the loss of revenue from Rice’s talent?

The nation was having a conversation. Do athletic accomplishments give you a pass on domestic violence? Are the goals of making money and winning football games more important than protecting vulnerable women?

Well, Planned Parenthood is the Ray Rice of the prochoice movement.  In fact, right now it is their bad behavior that is the biggest threat to abortion rights in America.  Sure they rack up a lot of yards for the team, but they can’t contain those disturbing videos.  Their star players, their medical directors, are seen haggling dismissively about the body parts of children and talking about the need to get their stories straight so they can stay out of legal trouble.

And sadly the prochoice movement is acting like the NFL, acting like the mindless fans that support their team no matter what. It seems that abortion covers a multitude of sins.  If you provide abortion services, you are not even vulnerable to wrong doing.  If you are watching,  right now many prochoice voices are suggesting that it isn’t even possible for Planned Parenthood to be guilty of breaking the law.  No need for an investigation.  On social media we are told that if Planned Parenthood looses its funding, women will have no place else to go. Women are telling stories about all the great things that Planned Parenthood has done for them.  And they sound like mindless fans worried about their fantasy football scores.

But what about those videos? There is a good chance that we haven’t yet seen what happened inside the elevator.

I just came across this great book, which was previously a series of lectures by DA Carson called “The God Who is There.” I am not sure if this is a title connection between Francis Schaeffer’s famous book. Anyway, the idea is to take a jet tour of the big story of the Bible in 14 lectures. Carson is a very learned, clear, and informed communicator and these talks are good! I have been challenged and refreshed. Best of all the talks are intended to be accessible to people who do not have a lot of previous bible knowledge.

You can visit the Gospel Coalition page to see the whole series and links to the book.
Here is the first talk:

The God Who Is There – Part 1. The God Who Made Everything from The Gospel Coalition on Vimeo.

Monty Python skit that is a very funny portrayal of German Vs. Greek philosophers playing soccer! No worries, its clean.