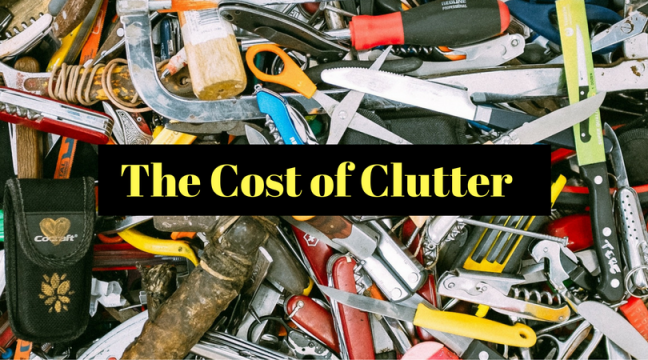 Today I found an old iPad charger in a drawer while cleaning out some clutter. This discovery made me take a moment to reflect. Why? Because I didn’t know I owned this charger. At some point I bought it and stowed it away. But that moment was lost in the archives. In fact, several months ago a friend asked me to borrow it because theirs stopped working and they had to wait for the new one to arrive in the mail.  When they asked, I told them no. I would have gladly loaned it, but I couldn’t share I didn’t have. And you might as well not own something if you don’t know that you own it or can’t find it.

I recently preached on some of the problems with materialism and consumerism at our church, so this has been on my mind. You can listen to the message here. But finding this charger clarified several things for me. Here are a few more observations that can fuel the movement to get away from “stuffocating” our souls with material things.

When you have too much stuff, you have trouble remembering what you own. If you do remember, then it is because you have devoted vital time and mental energy to keeping track of it. This is time and focus that should be spent on things that actually matter.  It can be like our own private version of warehouse management.  Simply trying to organize and remember what we already have can be exhausting, and expensive.

And if your house and garage are full, then something like this will probably happen to you:  You need something that you think you already own. But you don’t know for sure, and you definitely don’t know where it is. So you spend a lot of time and frustration looking for it. And if you can’t find what you are looking for, you may end up going to the store to buy another one anyway. Now you own 2 of them.

This whole arrangement is draining. And that is the real price of having too much stuff. It robs us of our time, focus, and emotional energy. And these are limited resources that  should be used for things that are really important, like God and people.  And it is not just exhausting when we are trying to find the thing we need. It is exhausting because thousands of things we might need some day are in the way of the life we are trying to live everyday.  How many of us know we should straighten up our stuff to make life more navigable, but the thought of spending several hours (or days!) is just too overwhelming?  What’s the answer? Lets go shopping!

Better to give deliberate thought to the meaning and purpose of our lives and then determine to only acquire and own what we need for that purpose. 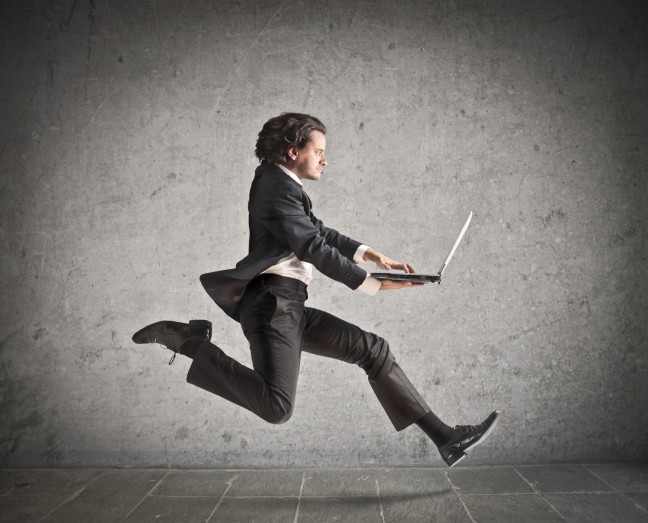 The problem with being over-busy is that you might actually get more done. But this only lasts for a brief period of time at the beginning. But invariably the rushing/exhausted pace leads to bad decisions and the inability to make judgments about what is really important. This is the lesson I am trying to work out in my own life.

Here is more fuel for the fire on this whole discussion:

“If I take some time off – on a holiday, over the weekend, or even just not checking mail in the evening after closing time – my decisions get better. I don’t just keep grinding it out, trying to get strategic by processing ever more detail. I start to notice what is really important so I can leave the rest, or delegate it to someone more qualified or more motivated to do that thing.

“When running at full tilt I don’t even have time to think of passing it off to others.  I’ve seen this over and over again in my work with people leading teams. Things are stuck not because there is no one to do them, but because the person who has them on their plate doesn’t have (or take) the time to clarify who should be doing them.”

Source: You Can’t Slow Things Down by Speeding Up – Next Action Associates 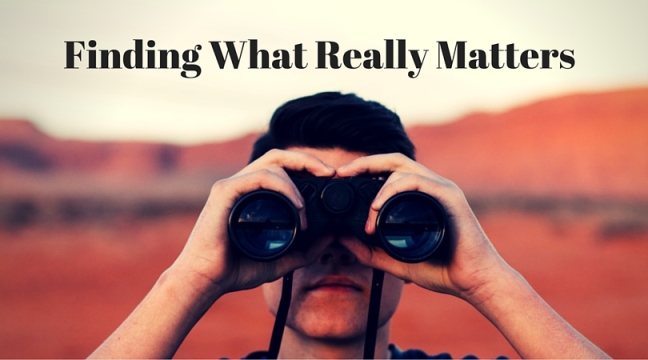 You can Essentialism Questions Ch. 6

It is easy to get lost in the raw details and miss the significance of the facts. We have to learn to find the “lead” in our lives the way journalists analyze a story. 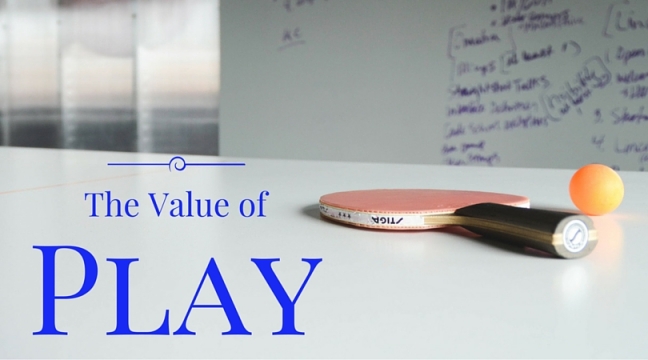 Recreation and play does not threaten a productive life, it is vital part of helping us grow and become more creative. 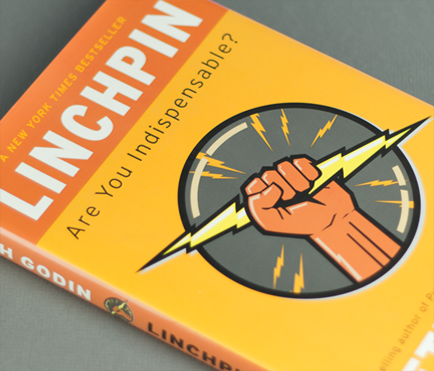 Seth Godin is the master of the short blog post. And that is refreshing! I follow his blog by email and have read several of his books. He always has a unique angle on things. This post was really enjoyable, and I read it out loud to my wife. I thought I would share it with you here. If you don’t get his stuff, wander over to his site and sign up.

BTW, in addition to his blog he is always working on cool projects. I listened to his entrepreneur “Start UP School” podcast a while ago and was challenged. Find it here:

“Bilbo Baggin’s great quote about being stretched thin (“I feel thin, sort of stretched, like butter scraped over too much bread.”) reveals a profound truth:

Most individuals and organizations complain of not having enough butter. We need more resources, we say, to cover this much territory. We need more (time/money/staff) to get the job done.

What happens if instead of always seeking more butter, we find the discipline to cover less bread?

Spreading our butter too thin is a form of hiding. It helps us be busy, but makes it unlikely we will make an impact.

It turns out that doing a great job with what we’ve got is the single best way to get a chance to do an even better job with more, next time.”

Source: Seth’s Blog: Is it too little butter, or too much bread? 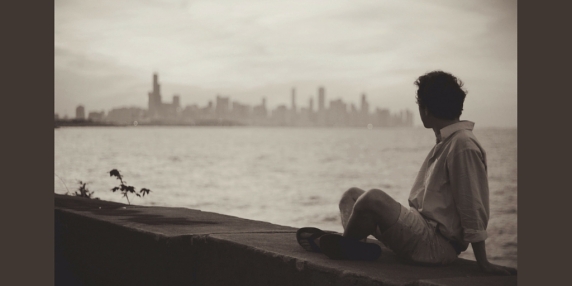 Download a pdf of these questions here: Essentialism Questions Ch. 5

In order to figure out what is essential we need designated times and spaces in order to think.  These must be free from other obligations and distractions. 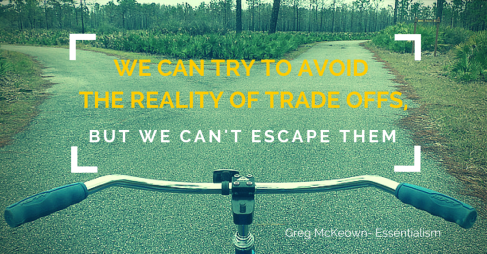 Download a pdf of the questions that is more friendly for journaling here: Essentialism Questions Ch. 4

You can download a journal-friendly version of the questions here: Essentialism Questions Ch. 3

This is a list of discussion questions to help work through the content of the book “Essentialism” By Greg McKeown. Why discussion questions? Because interacting with the material and thinking through how the principles apply in your own circumstances is more likely to produce real learning and lasting change.

Most things that occupy our time are NOT important. They are a part of the “trivial many” vs the “vital few.” 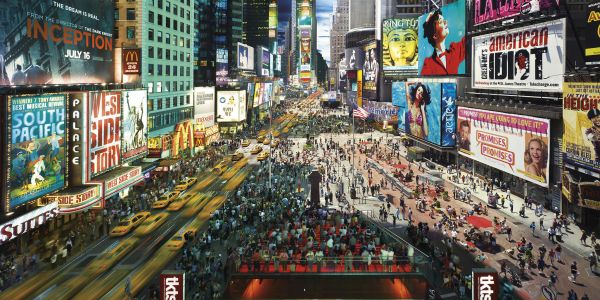 Sometimes you read an article that powerfully says something you were already thinking, but had trouble putting into words.  This is one of those articles for me.  I am admittedly addicted to the same craving for speed that afflicts the rest of us. But more and more I am feeling cheated. I am feeling like I want to raise a protest. I want to “stick it to the man” that keeps yelling “SCHNELL!”

Mark Taylor has done a good job showing the deleterious effects of a lust for “more and more, faster and faster” on several dimension of our culture. He specifically discusses the impact on capital markets, communication, and education.

“The faster we go, the less time we seem to have. As our lives speed up, stress increases, and anxiety trickles down from managers to workers, and parents to children.”

Our ability to do things faster has had exactly the opposite effect that thinkers and politicians predicted.  We thought that being able to finish a job sooner would allow us to clock out and go home. That we would now have time for recreation, art, and family. Nope. Instead, “Contrary to expectation, the technologies that were supposed to liberate us now enslave us.”  He writes:

“With the emergence of personal computers and other digital devices in the late 1960s and early 1970s, many analysts predicted a new age in which people would be drawn together in a “global village,” where they would be freed from many of the burdens of work and would have ample leisure time to pursue their interests. That was not merely the dream of misty-eyed idealists but was also the prognosis of sober scientists and policy makers. In 1956, Richard Nixon predicted a four-day workweek, and almost a decade later a Senate subcommittee heard expert testimony that by 2000, Americans would be working only 14 hours a week.”

The quest for speed has been paired with our desire to measure success with numbers. This has destroyed or dismissed hard-to-count virtues like creativity, reflection, and problem solving. And Oh, yeah, what about happiness?  There is a difference between “rapid information processing,” the kind of thing we do when reading and writing online, and “slow, careful, deliberate reflection.”  By the way, when was the last time you read anything about “slow, careful, deliberate reflection.”   Yeah, me too.  Probably in too much of a hurry.  We are too busy to ask whether our pace is actually good for us.

By the way, when was the last time you read anything about “slow, careful, deliberate reflection.”

One of the other bad effects of speed is that it tends to diminish complexity in favor of simplicity. Now, simplicity is a good thing. But not everything is simple. And paradoxically, arriving at the kind of simplicity that is truly valuable takes a LOT of time. Greg McKeown has argued for this in his book Essentialism.  If you are going to figure out what is truly important you will need time and space to do it.

Life is moving too fast, and we are NOT better off because of it. Read this article and take another step toward deliberately slowing down.